Questions 1-11 are bases on the following passage.

The Battle Against White-Nose Syndrome

Bats play a vital role in ecosystems, providing billions of dollars worth of insect-suppression and pollination services to farmers around the United States. But now, bats face a serious threat: white-nose syndrome (WNS), a fungal disease that causes a loss of body fat, unusual winter behavior, and even death. Since the first documentation of the disease in 2006, between 5.7 and 6.7 million North American bats have perished ① from a disease referred to as WNS, with some bat habitats experiencing population declines of more than 90 percent. As of 2014, twentyfive states and five Canadian provinces have confirmed cases of ② WNS; the affected region now reaches as far west as the Missouri-Kansas border.

Scientists have determined that the cause of white-nose syndrome is a fungus— Pseudogymnoascus destructans—that flourishes in cold, wet environments and reproduces by generating spores that can lodge in the floors and walls of caves as well as on ③ their muzzles, ears, wing membranes, and hairless body parts. ④ For reasons currently unknown, infected bats also demonstrate atypical behavior at hibernation sites: they awaken, fly outside during the day, and hover around cave mouths. This excessive activity results in the depletion of vital fat ⑤ stores leading to life-threatening emaciation

⑥There is federal funding available to support research on WNS. With grants already in excess of $17.4 million, scientists are conducting epidemiological research in order to determine the most effective agents to combat the disease. Interestingly, the research is beginning to suggest that humans may play a prominent role in the spread of the fungus, as the distance between infected caves often ⑦ exceed the typical migratory patterns of bat populations. ⑧ In contrast, the USDA Forest Service has mandated a five-year closure of caves and mines in thirteen states and has ceased all spelunking activity. Through these measures, possible only through collaboration with various While it is unlikely that affected species will recover quickly (due to their slow reproductive rates bats have one offspring, or pup, ⑨ annually). Several species of bats have exhibited resistance to the destructive powers of WNS. The Virginia big-eared bat population, for example, has not been significantly affected, which led scientists to an exciting discovery: a naturally occurring yeast on the bats‘ fur inhibits the growth of the fungus.organizations and help from the public, scientists hope to avoid a further decline of the bat population in the United States.

This ⑩disclosure offers a glimmer of hope in the battle against WNS. ⑪ 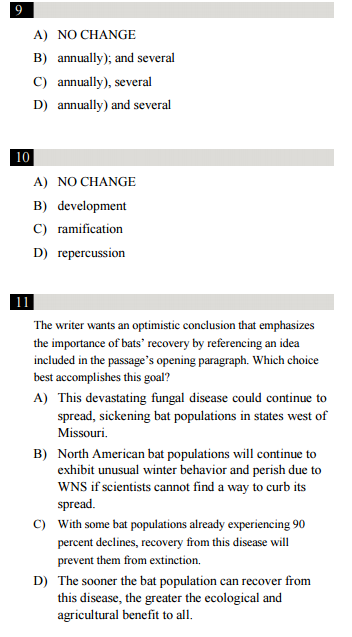