Questions 1-11 are bases on the following passage.

The Servicemen's Readjustment Act of 1944, often referred to as the GI Bill, was passed by the federal government to assist US veterans returning home after their service in World War II. It provided various kinds of support, ① such as support in the form of unemployment benefits and mortgage assistance. The GI Bill is best known, however, for the education and training assistance② they provided veterans. By 1956, the bill had enabled nearly eight million veterans to pursue higher education and training opportunities. The resulting influx of students had a dramatic effect on higher education in the United States. ③This sharp increase primarily took place during the post-war years. In that relatively short time, the GI Bill engendered long-lasting changes in the landscape of US higher education.

Under the provisions of the 1944 GI Bill, veterans

received financial support to take academic, technical, or vocational classes. For a variety of reasons—to build on their technical military experience, ④ to support their families, or perhaps to retrain and become competitive in a pre-war professional career—many veterans chose the

second or third option. Whether they enrolled in a technical engineering class or a vocational class on

auto-repair, ⑤they’re overarching objectives were to become employed. According to a survey analysis,

veterans returning to the University of Illinois had ⑥one “predominating request”: an efficient course of study to prepare for a job.

Many new programs began to emerge in response to the rising demand for job-oriented training and education. For example, a proposal to expand the programs for technical and general education in New

York surfaced as early as ⑦1944. The State University of New York (SUNY) was subsequently founded in 1948. Massachusetts‘ Stonehill College, which ⑧ has been established in the same year, estimates that veterans comprised up to a third of its first entering class.

⑨Some vocational training programs were even created specifically for the benefit of returning veterans. One of the most unique examples in this category is the Culinary Institute of America, founded in 1946 to offer ⑩a novel curriculum for learning cooking stuff.

By opening the gates of higher education to veterans,

the GI Bill ⑪ dramatically increased the college enrollment growth rate. The bill is credited with producing 500,000 engineers, 250,000 teachers, 200,000 medical professionals, and 117,000 metal workers. At that time, this was the most highly educated workforce in the country‘s history. 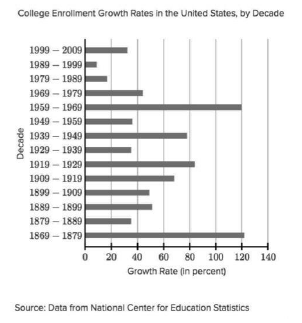 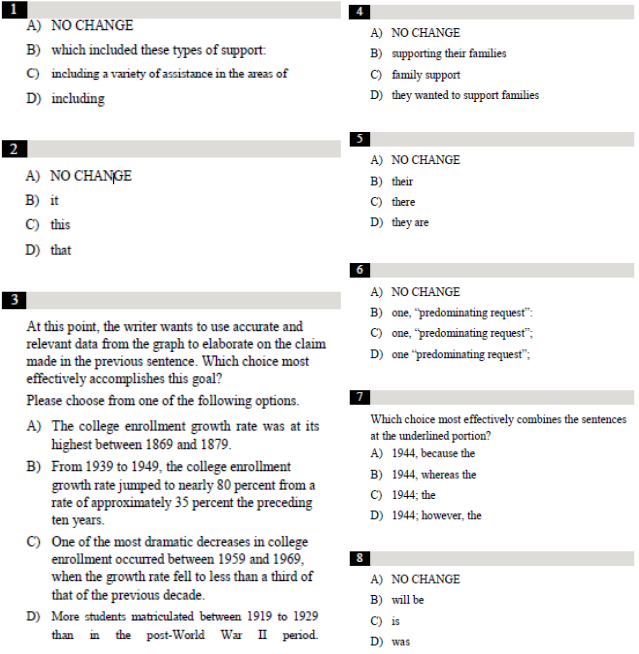 Which choice provides the most effective transition at this point?

B) Eventually, these numbers would taper off.

C) Nevertheless, the GI Bill had a long-lasting impact on the demographics of higher education.

D) Nor were these figures unique to one college.

B) a new bunch of courses in the culinary arts.

C) an unprecedented curriculum in the culinary arts.

D) a never-been-done-before batch of classes on cooking.

Which choice most effectively asserts the claim supported by the rest of paragraph?

B) eased the transition for the millions of veterans returning home after their military service.

C) shaped not only colleges and training programs but also the workforce as a whole.

D) transformed the demographics of colleges all over the United States.