Questions 1-11 are based on the following

This passage is excerpted from David B. Wake and Vance T. Vredenburg, “Amphibians in Crisis.” ©2008 by The National Academy of Sciences of the USA.

Amphibians have received much attention during the last decades because of a now-general understanding that a larger proportion of amphibian species are at a risk of extinction than those of any other taxon.* Why this should be has perplexed amphibian specialists.A large number of factors have been implicated,including most prominently habitat destruction and epidemics of infectious diseases; global warming also has been invoked as a contributing factor. What makes the amphibian case so compelling is the fact that amphibians are long-term survivors that have persisted through the last four mass extinctions.

Paradoxically, although amphibians have proven themselves to be survivors in the past, there are reasons for thinking that they might be vulnerable to current environmental challenges and, hence, serve as multipurpose sentinels of environmental health. The typical life cycle of a frog involves aquatic development of eggs and larvae and terrestrial activity as adults, thus exposing them to a wide range of environments.

Frog larvae are typically herbivores, whereas adults are carnivores, thus exposing them to a wide diversity of food, predators, and parasites. Amphibians have moist skin, and cutaneous respiration is more important than respiration by lungs. The moist, well vascularized skin places them in intimate contact with their environment.

One might expect them to be vulnerable to changes in water or air quality resulting from diverse pollutants.Amphibians are thermal-conformers, thus making them sensitive to environmental temperature changes, which may be especially important for tropical montane(e.g., cloud forest) species that have experienced little temperature variation. Such species may have little acclimation ability in rapidly changing thermal regimes.In general, amphibians have small geographic ranges, but this is accentuated in most terrestrial species (the majority of salamanders; a large proportion of frog specie also fit this category) that develop directly from terrestrial eggs that have no free-living larval stage.These small ranges make them especially vulnerable to habitat changes that might result from either direct or indirect human activities.

Living amphibians (Class Amphibia, Subclass Lissamphibia) include frogs (~5,600 currently recognized species), salamanders (~570 species),and caecilians (~175 species). Most information concerning declines and extinctions has come from studies of frogs, which are the most numerous and by far the most widely distributed of living amphibians. Salamanders facing extinctions are centered in Middle America. Caecilians are the least well known; little information on their status with respect to extinction exists.

The Global Amphibian Assessment completed its first round of evaluating the status of all thenrecognized species in 2004, finding 32.5% of the known species of amphibians to be “globally threatened” by using the established top three categories of threat of extinction (i.e. Vulnerable, Endangered, or Critically Endangered); 43% of species have declining populations. In general, greater numbers as well as proportions of species are at risk in tropical countries.

Updates from the Global Amphibian Assessment are ongoing and show that, although new species describes since 2004 are mostly too poorly known to be assessed, >20% of analyzed species are in the top three categories of threat. Species from montane tropical regions, especially those associated with stream or streamside habitats, are most likely to be severely threatened. 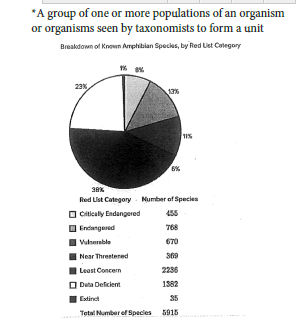 1.The main idea of the first two paragraphs is that amphibians

A) have traditionally been very persistent but are now disproportionately endangered.

B) face a risk of extinction greater than that of any other group of organisms.

C) have been praised by scientists for their ability to withstand the last four mass extinctions.

D) now face extinction across all species because of human activity.

2.As used in line 10,”compelling” most nearly means

3.The author implies that the study of frogs and other amphibians is especially important because these species

A) are sensitive to environmental changes that might affect other species in the future.

B) have less ability to adapt to changing environmental conditions than other species do.

C) are exposed to more predators and parasites than other species are.

D) embody the principles of evolution more clearly and linearly than other species do.

4.Which choice provides the best evidence for the answer to the previous question?

5.The author discusses the thermal conformity of amphibians in order to

A) show why they are so susceptible to being harmed by changes in their environments.

B) contrast them with other types of animals that other scientists have studied in greater depth.

C) prove that amphibians are the most sensitive of all animals and therefore need to be treated with greater care.

D) question why the geographic ranges of amphibians is so small compares to that of other species.

6.Frogs have been studied more than other amphibians because

A) members of other species are less common and not found in as many places.

B) they model human biology better than other amphibians.

C) so many other amphibian species have recently become extinct.

D) their sensitivity to environment makes them ideal for study.

7.Which choice provides the best evidence for the answer to the previous question?

A) show that scientists consider amphibians’ future perilous by the seriousness of the terms.

B) lend authority to the author’s argument about amphibian extinction by using a well-recognized phrase.

C) quote the scientists at The Global Amphibian Assessment so that readers understand the limited nature of their statistics.

D) demonstrate that, though amphibians have been referred to as threatened, this term is questionably applied.

9.The graph supports the statement in the last paragraph about the evaluation completed in 2004 by

A) demonstrating that approximately 1/3 of amphibian species are in the top three categories of threat.

B) showing that only 1% of amphibians have gone extinct in the wild, despite predictions to the contrary.

C) highlighting that scientists have not collected enough data on a significant number of amphibian species.

D) proving that the remaining species of amphibians will become extinct in the future.

10.Information from the graph and the passage suggests that the second-largest category includes most of the world’s

11.The third-largest category represents amphibians that are classified as