Questions 1-11 are based on the following passage.

Adapted from “A Molecular Model of Blood Cell Renewal.” ©2004 by the Public Library of Science.

A developing organism captured on time-lapse video is a wonder to behold. If you’re watching a chick embryo, by day 3, you’ll see millions of cells engaged in a frenzy of activity, as rapidly dividing cells migrate to new positions, acquire the characteristics of specialized cells, and craft well-defined tissues, organs, and limbs in just under two weeks. In addition to the cells destined for specialization is another important group, stem cells, whose progeny have two very different fates. They can either “self renew”-- that is, make identical copies of themselves-or generate intermediate progenitor cells that give rise to mature, differentiated cells.

Both differentiation and self renewal are guided by an elaborately regulated genetic program, which transforms embryonic stem cells into the many differentcell types that make up the body. Adult stem cells share the hallmark trait of self renewal, but are relatively rare: in bone marrow, the source of hematopoiesis,or blood [formation], only an estimated one in 10,000-15,000 cells is an adult hematopoietic stem cell (HSC).

Studies that have compared the gene expression profiles of different types of stem cells to identify genetic signatures of “stemness” have found only a limited number of signature genes. And the molecular mechanisms that regulate this so-called potency and the self renewal progress have remained obscure. Now, focusing on HSCs, Margaret Goodell and colleagues have undertaken a systematic evaluation of HSC renewal. The study identifies molecular signatures associated with discrete stages of the HSC self renewal cycle and proposes a molecular model of the progress

HSC renewal passes through three stages: quiescence, activation and proliferation, and a return to the dormant state. HSCs give rise to both red blood cells, which carry oxygen and carbon dioxide, and white blood cells, which fight infection. Once activated by a trigger, dormant HSCs engage a regulatory program that rapidly churns out billions of cells, then puts the brakes on cell division, prompting the return to a nondividing, quiescent state..

To understand the genetic programs underlying this progress, Goodell and colleagues induced proliferation in HSCs (with the chemotherapeutic drug, 5-fluorouracil, or 5FU), then allowed the cells to return to quiescence, so they could characterize the changes in gene expression that occurred during each stage.They compared these time-specific patterns to the gene expression profiles of naturally proliferating fetal mouse HSCs (which undergo massive proliferation) and quiescent adult mouse HSCs (which hardly divide at all) to find genes associated with the two different states.

Genes sere grouped into proliferating or quiescent groups based on when they are expressed after 5FU treatment, and these groupings were refined based on comparisons to previously published HSC gene expression data. Functional analysis of these genes found a bias toward genes involves in cell division inhibitors in the quiescent stage, supporting the logic of the groupings.

With these results, Goodell and colleagues constructed a model of the HSC self renewal cycle: quiescent HSCs maintain a “state of readiness”, molecularly speaking, that allows a quick response to environmental triggers. A stressor (like the chemotherapy mentioned above) triggers a “prepare to proliferate” state-a kind of pregnant pause-and then the proliferation machinery kicks in, going through an early and late phase before quiescence returns. By shedding light on the molecular mechanisms of stem cell renewal, this study will aid efforts to develop stem-cell-based clinical therapies, which depend on replicating the HSC self renewal cycle to replenish diseased or damaged tissue, and will ultimately guide efforts to grow stem cell colonies outside the body, a long-standing goal that would have many clinical applications. 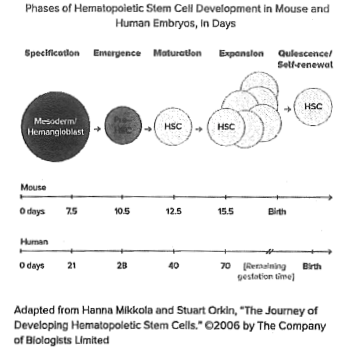 1 The main purpose of the passage is to

A) contradict a widely held belief about hematopoietic stem cells.

B) discuss the social implications of human stem cell research.

D) Explain the process by which human stem cells differentiate into specific tissues.

2 It can reasonably be inferred from the passage that, prior to Goodell’s study, research concerning stem cells had

A) resulted in a comprehensive list of those genes involved in stem cell renewal and differentiation.

B) failed to identify any genes that were expressed exclusively in stem cells.

D) isolated a few genes that were expressed exclusively in stem cells but had not identified how they worked.

A) Hematopoietic stem cells can differentiate into either red blood cells or white blood cells.

B) The process of stem cell renewal can be subdivided into the stages of quiescence, activation, and proliferation.

D) Different sets of genes are expressed in hematopoietic stem cells based on the stage of stem cell renewal.

A) Hematopoietic stem cells can differentiate into either red blood cells or white blood cells.

B) The process of stem cell renewal can be subdivided into the stages of quiescence, activation, and proliferation.

D) Different sets of genes are expressed in hematopoietic stem cells based on the stage of stem cell renewal.

6 Which choice provides the best evidence for the answer to the previous question?

A) Stem cell research has the potential to substantially improve scientists’ ability to repair damaged tissues in the body.

B) While stem cell research can improve our understanding of human development, it requires advanced training and education.

9 The main purpose of the figure is to

A) suggest that both human and mouse embryonic stem cells spend most of their rime in the quiescent phase of stem cell renewal.

B) show that the timelines of stem cell renewal in human and mouse embryonic stem cells are identical.

C) illustrate the different timelines by which human and mouse embryonic stem cells renew and differentiate.

D) highlight how mouse stem cells differentiate into various tissues of the body.

10 How does the figure support the author’s description of the stem cell renewal process in the final paragraph of the passage?

A) It establishes that stem cells go through a short period of quiescence before returning to a prolonged state of proliferation.

B) It indicates that the stem cell renewal process occurs rapidly before birth but then slows down considerably after birth.

C) It shows how stem cells go through a phase of rapid proliferation before returning to a state of quiescence.

D) It clarifies how stem cells could be used to help repair damaged tissues in various clinical situations.

11 According to the figure, at 15.5 days of embryonic development a mouse’s hematopoietic stem cells are in the

Questions 1-11 are based on the following passage and supplementary material.