Questions 1-5 are bases on the following passage.

Scientists have been launching cometary missions since 1978. The first one, a joint mission by the European Space Agency, and the National Aeronautics and Space Administration (NASA), was a ―flyby‖ in which the spacecraft collected data while passing around Comet Giacobini-Zinner. ① However, the landing of the Rosetta space probe on comet 67P/Churyumov-Gerasemenko in 2014 was different: it marked the first time that a probe landed on a ②comet and giving scientists an unprecedented opportunity to study the surface of a comet. In order to continue this valuable research, additional missions are needed; thus, it is critical that more funding be allocated for this purpose.

The 2014 Rosetta mission provided a rare opportunity for scientists to test a number of hypotheses regarding the composition of ③comets; the distribution of organic compounds in our solar system and the origins of life on Earth. Unlike other cometary missions, the Rosetta spacecraft contained a probe, Philae, that was able to land on the surface of a comet.

Based on data collected from Philae, scientists were able to conclude that the water vapor on the comet was substantially different than the water vapor on Earth, suggesting that the water on Earth likely did not originate from comets. In addition, scientists have used the data from Philae ④ to investigate why essential amino acids on Earth exist almost exclusively in one of two possible forms. Claudia Alexander, a project scientist for Rosetta at NASA‘s Jet Propulsion Laboratory, says that the data collected from 67P will give us a fuller understanding of how substances form to create livable environments.

In addition to improving our understanding of life on Earth, an increase in funds for cometary missions would give scientists an opportunity to learn from ⑤they’re failures and improve future missions. During the Rosetta mission, for example, the probe bounced and did not fully insert itself into the comet. Luckily, the landing did succeed, but more opportunities for trials would help scientists perfect their methods and aid in the collection data from different types of comets in our solar system. 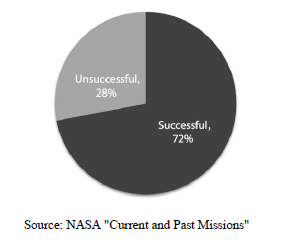 At this point, the writer wants to add accurate information from the graph. Which choice best accomplishes this goal?

B) Before 2014, the majority of attempted cometary missions were considered unsuccessful.

C) Between then and 2014, 72 percent of the cometary missions were successful.

D) Of the missions attempted since then, 44 percent has been successful.

B) comet, but it gave

B) comets, the distribution of organic compounds in our solar system,

C) comets, the distribution of organic compounds in our solar system;

D) comets; the distribution of organic compounds in our solar system

B) to investigate, why

D) to investigate why: