Questions 42-52 are based on the following passage.

This passage is adapted from Richard J. Sharpe and Lisa Heyden, "Honey Bee Colony Collapse Disorder is Possibly Caused by a Dietary Pyrethrum Deficiency." ©2009 by Elsevier Ltd. Colony collapse disorder is characterized by the disappearance of adult worker bees from hives.

1 Honey bees are hosts to the pathogenic large ectoparasitic mite Varroa destructor (Varroa mites). These mites feed on bee hemolymph (blood) and can kill bees directly or by increasing their susceptibility to secondary infection with fungi, bacteria or viruses. Little is known about the natural defenses that keep the mite infections under control.

3 We suspect that the bees of commercial bee colonies which are fed mono-crops are nutritionally deficient. In particular, we postulate that the problem is a diet deficient in anti-mite toxins: pyrethrums, and possibly other nutrients which are inherent in such plants. Without, at least, intermittent feeding on the pyrethrum producing plants, bee colonies are susceptible to mite infestations which can become fatal either directly or due to a secondary infection of immunocompromised or nutritionally deficient bees. This secondary infection can be viral, bacterial or fungal and may be due to one or more pathogens. In addition, immunocompromised or nutritionally deficient bees may be further weakened when commercially produced insecticides are introduced into their hives by bee keepers in an effort to fight mite infestation. We further postulate that the proper dosage necessary to prevent mite infestation may be better left to the bees, who may seek out or avoid pyrethrum containing plants depending on the amount necessary to defend against mites and the amount already consumed by the bees, which in higher doses could be potentially toxic to them.

4 This hypothesis can best be tested by a trial wherein a small number of commercial honey bee colonies are offered a number of pyrethrum producing plants, as well as a typical bee food source such as clover, while controls are offered only the clover. Mites could then be introduced to each hive with note made as to the choice of the bees, and the effects of the mite parasites on the experimental colonies versus control colonies.

5 It might be beneficial to test wild-type honey bee colonies in this manner as well, in case there could be some genetic difference between them that affects the bees' preferences for pyrethrum producing flowers. 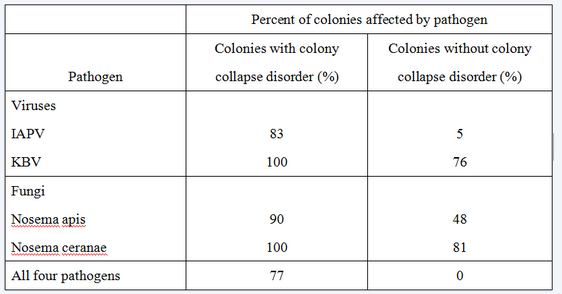 Adapted from Diana L. Cox-Foster et al., "A Metagenomic Survey of Microbes in Honey Bee Colony Collapse Disorder." ©2007 by American Association for the Advancement of Science.

Based on data in the table, which of the four pathogens infected the highest percentage of honeybee colonies without colony collapse disorder?

Choice D is the best answer.