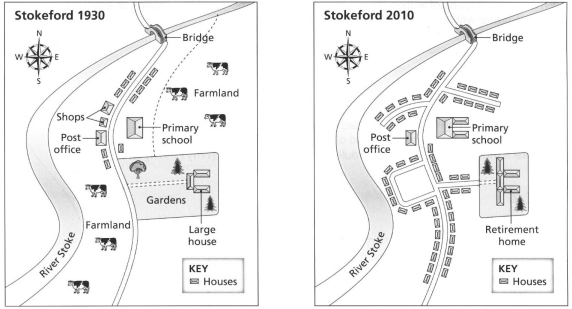 参考范文：The maps compare the changes of the village of Stokeford in both 1930 and 2010.

According to the first map, the village was relatively underdeveloped. There was a river in the west, which was crossed by a road in the north. A bridge could be found over the River stoke, although the village ran alongside the river to the east of it. Besides this, we can see some shops and a post office along the western side of the road. North of this, there were some houses, a primary school, and a large house with gardens. There was farmland located on both sides of the road.

80 years later, many new buildings were constructed, making the village more modern. It is noticeable that no farmland existed in the village anymore and the shops and the garden were removed or reduced in size and replaced by more houses along the main road. What is more, the primary school doubled in size. Besides, the garden being reduced in size, the large house was expanded into a retirement home.

Overall, it is clear that the River Stoke and a bridge were well-maintained during the period and a large number of houses had been built in 2010 to cater for an enlarged village population, (although at the cost of local farmland).