The graph below shows the percentage of workers in 5 different European countries with a days or more illness absence from 1991 to 2001. 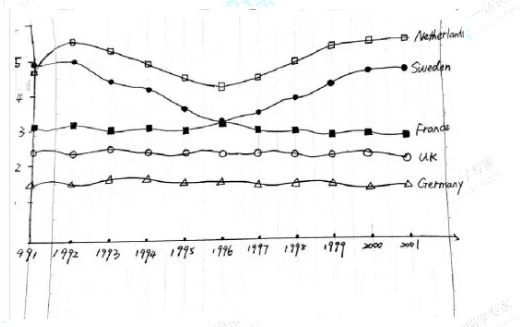 题目：The government should control the amount of violence in films and on television order to decrease the level of violent crime in society. To what extent do you agree or disagree

Nowadays, many people argue that the government should control the amount of violence in films and on television, in order to reduce social crimes. In my view, this assertion is partially wise, and my reasons would be explored as below.

Admittedly, there are many good reasons for controlling the amount of violence in films and on television. First, violent films and television are mental poisons for the audience It is because they contains numerous of erotic, corrupt and provoking episode, with long exposure to which, viewers might become aggressive and eccentric. In addition, violence contents set negative role models for young viewers, especially the youth. Activities like fighting, shooting or killing done by movie stars send teenagers a wrong message that violence is an effective or even essential solution to all troubles. Therefore, these youngsters with immature minds begin to admire violence and disrespect social rules, which leads to the increasing of the juvenile delinquents. According to the analysis above, it is clear that the measure of limiting violent information on media should be encouraged, for the reason that it can directly cut off the access to those illegal and evil behaviors and thoughts, thus keeping people from imitating them.

Advocates claim that the practice of controlling the amount of violence in mass media is a brazen violation of the people's basic right to know the truth of the world. For example, some films contain some violence, but they reflect the things happened around us. Rather than producing negative effects on audience, to some extent, these films educate them. Furthermore, violence in films or on television programs cultivates people's senses of crisis and responsibility, which makes ordinary people and police work better for public security. Consequently, it is irresponsible and foolish to blame the media for violence in our society.

As far as I am concern, I strongly believe that the amount of violence in films and TV should be controlled. At the same time, we cannot deny the advantages brought by them. And the best policy is to develop the merits of the violent films and television, while grading and filtering them.