The table below shows the employment rate and average annual salary of graduates from the Australian University. (重复题目16/11/2013) 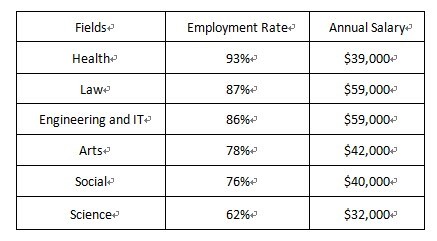 The table above illustrates the data about the percentage of employment as well as the average annual salary of individuals who newly graduated from five majors in Australian universities, namely, Health，Law, Science, Engineering &I.T., Art &Social Science and Business in 2009.

As can be seen from the table, the proportion of employment in the majors of Law and Engineering was relatively high, 87% and 86% respectively. Compared with other majors, the salary of both schools’graduates ranked the top position which accounted for 5800 Australian dollar per year. In contrast, although the major of Health proposed the largest percentage of employment, the annual income of these graduates was the second lowest among the ones that mentioned. On the other hand, graduates from Science school possessed the least salary (3900 Australian Dollar) and also the smallest proportion of employment (39 percent). The data of employment rate and annual salary of Business and Art&Social Science graduates was medium. The former had 78 percent and 5200 Australian dollars income meanwhile the later existed 72 percent and 5000 Australian dollars every year.

Overall, it is apparently that the employment ratio and annual salary in five majors in Australian universities are not always directly proportional but the two factors do have an effect on each other.

In many countries, people decide to have children at a later age than in the past? Why? Do advantages of this development outweigh disadvantages? (重复题目21/05/2015)

In the modern world, young adults prefer to raise children late in their life. This essay will mainly analyze the potential reasons and how it will affect society and family life as well.

There are three main factors contributing to the postponed parenthood.

In general, people who bear great pressure from their work are less likely to prepare childbirth early, considering that they may have little time to attend their children. This problem can also be attributed to the high cost of modern life. The young people without adequate savings will probably be afraid of high living cost and expensive tuition. Another reason for this is the difficulty in balancing work and life. More young people emphasise the promotion in career, and thus spare little time for a stable marriage life， which is viewed as a significant element for rearing children.

It cannot be denied that late childbirth is able to provide more time for young couples to be ready for the new members in their families. They need to learn how to raise children before they decide to have children. In addition, if they delay childbirth, they can provide more economic support for children' s rearing and education.

However, the low birthrate will cause an increase in ageing population. It is widely known that most medical needs and costs occur in the last years of life. Therefore, young people have to face the need to care for the elderly family members. From the perspective of the society, due to a shift in the age structure of the workforce, an ageing society with a low birthrate is likely to encounter labour shortage.

To summarize, the delay in having children is mainly attributed to the stresses and strains men and women bear in both their life and work. Although this may help them better prepare for their children’s development, the negative effects on both society and family life cannot be ignored.