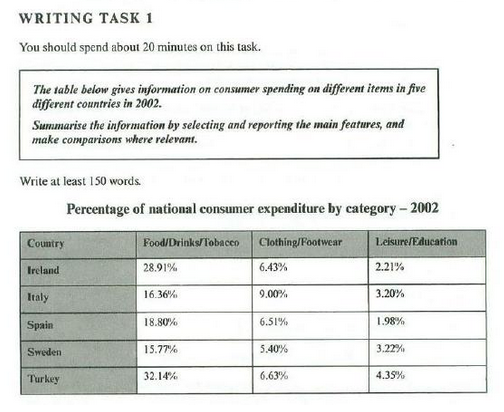 The table gives the breakdown about data on consumer spending on various items (Food/Drink/ Tobacco, Clothing/Footwear and Leisure/Education) in five different countries (Ireland, Italy, Spain, Sweden and Turkey) in 2002.

Generally, each country consumed much more in food/ drink/ tobacco where Turkey dominated the first place with 32.14%, standing in marked contrast with Sweden (only 15.77%) than in other 2 categories. In terms of Clothing/ Footwear, Italy expectedly spent most with 9% compared with still Sweden seeing the smallest proportion (5.4%). As for Leisure/ Education, it was Turkey and Spain that consumed the most and least with 4.35% and 1.98% respectively.

Additionally, we can see immediately that in food/ drink/ tobacco, after Turkey, Ireland, Spain and Italy came in turn with 28.91%, 18.80% and 16.36%. On the contrary, in Clothing/ Footwear, we failed to see big gap from Spain, Ireland and Sweden in middle positions which saw different reductions of 2.49%, 2.57% and 3.6% in comparison with Italy, likewise, in Leisure/ Education, still small differences were found. To be exact, Turkey was followed by Sweden, Italy and Ireland in a slow falling turn with 3.22%, 3.2% and 2.21%.

In conclusion, people prefer to spend on those products directly relating to food.