I think it depends. Many people just love shoes of famous brands like Chanel or Gucci. But other people may prefer shoes which are comfortable but not that expensive.

2.Which do you prefer, comfortable shoes or fashionable ones?

I prefer comfortable shoes. Comfort comes first. But it would be perfect if they are also fashionable. Nowadays we have so many choices and I believe we can always find shoes we like.

3.Do you buy shoes from online shops?

Yes, I have several pairs of shoes that I bought from online shops. They are usually cheaper than those from physical stores. Also I have more choices.

4.How often do you buy shoes?

Well, it depends. On average I usually buy two to three pairs of shoes each season. But boots are more expensive than sandals. So I have more sandals than boots.

5.Have you ever bought shoes online?

I have a pair of boots that I bought from online shops. I actually tried on the boots in a physical store. But it does not have my size so I bought them from an online shop. It is a delightful shopping experience after all. 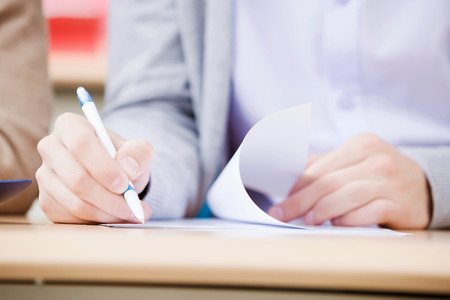 Describe a family member who has had important influence on you

who the person is

what kind of person he or she is

what this person has done to influence you

and explain why you think this person isimportant to you

Talking about a family member that has important influence on me, the first one that came to my mind is my father. He is a lawyer. He is the most dependable and hardworking person I have ever known. He often leaves home early and comes back late. Though he is very busy, he always manages to make time for me. Family still comes first to him. To me he is a caring father. When I was a kid, he would watch cartoons with me. Whenever I was short of playmates, he would take the place. So I have a lot of fond memories of childhood.

I think the most important influence he has on me is his attitude toward learning. He did not take law as his major when he was in college. Instead his major was about agriculture cultivation. He learnt the courses all by himself and all together he spent seven years to pass the Judicial Examination. He failed many times but he did not quit. From his experience, I come to realize that it takes great effort to be successful. So every time I met difficulties, I would remind myself to carry on. I have no reason to give up. He really sets a good example for me.

①These days, people from different generations live together, do you think this is a problem?

Well I think it depends. For the big family, the family members may have different living styles. For example, the elders may prefer to sleep early and get up early. But for the younger ones, they may prefer to take full use of the night to entertain themselves, watching TV or playing games. So they may have problems on daily schedules. Besides, the elders may contradict with younger members in their conceptions of education and work. But living together may also bring about benefits. In the family, grandmas and grandpas can help the young couple to take care of their children and relieve them from trivial housework. So it really depends.

②Why do some children get spoiled at home?

I think part of the reason should be traced back to their parents. Nowadays many couples choose to have only one child or two children. Children from these families get so much love that they have everything done for them. Gradually they may take it for granted that they don’t have to do anything. Many children get spoilt also because their parents are so busy with their work that they don’t have much time with their children. They cannot correct their children immediately when they make mistakes. Even worse, they may not have the time to spot their children’s problems.

③Do young adults in your country like to communicate with old people?

Well, it depends. Many young adults like to communicate with old people because they can seek for advices from them. I like to talk to my grandpa whenever I have problems. He would not judge me. Instead, he would listen to me patiently and offer some nice advices. Sometimes he may not totally understand my problem, but he would comfort me and make me feel better. But not everyone is as lucky as me. I have friends who don’t like to talk with their grandparents because they think they are too old-fashioned.

④How much do you think people should be responsible for (the welfare of) their own parents?

I think people should shoulder at least half responsibility for the welfare of their own parents while the government and work units of their parents shoulder the other half. Parents are people who give us life and take care of us. They nurture us, protect us and offer the best love they could ever give. So it is natural for us to take care of them when they grow old. But sometimes there is too much burden to take full responsibility for their welfare, especially to people who have a large family to support. Luckily, companies and units now offer welfare insurance and the government also lends a hand to relieve people of the stress.

Describe an event in history in your country

and how you feel about this event.

Well I guess everybody has heard about the story of Journey to the West. A monk named Xuanzang took three of his disciples to travel to the Western Regions to obtain Buddhist scriptures. They have suffered a lot on their way. Though the stories were made up, Xuanzang was a real figure in the history. He was a monk at Jingtu Temple in the early Tang Dynasty, which is about 1400 years from now. He felt that the Chinese translations of Buddhist scripture at that time were too poor, so he was determined to bring back the original Buddhist scriptures. He travelled a long distance to India. The journey took him a few years to complete. It was really a magnificent feat at that time. When Xuanzang finally arrived back in Chang’an, the emperor warmly welcomed him. The emperor provided money for his projects. A pagoda was built to store all the scriptures Xuanzang brought back from India. That pagoda is now the famous Big Wild Goose Pagoda located in Xi’an.

I think his story is quite inspiring. Also I feel I am so lucky to have been born in modern ages. Nowadays if I want to go to another country, I could take a plane. It only takes a day at most to go to any place in the world.

①How do people in your country learn about historical events?

Well, I think it depends. A lot of people like to learn history because they can learn lessons and gain experience from history. History often repeats. So if we look back, we can avoid making the same mistakes that our ancestors once made. Besides, people can gain power from history, to know how our ancestors overcame difficulties and became successful, to know how they defended our country and devoted their lives to noble courses. But there are also many people who do not like to learn history. They find the past experiences out dated and they believe the most important thing is to move forward.

③What kind of people can appear in history?

Well in each story there are good figures and there are also bad figures. I think it is also the case of history. Different kinds of people have appeared in history and been memorized for different reasons. Many of them are great politicians, like the First Qin Emperor — he united the country for the first time in history; Emperor Taizong of Tang Dynasty — under his reign, China became the most prosperous country in the would. There are also extraordinary scientists, artists, poets… They are remembered and praised to this day. But in history there are also historical figures who are despised by people, like Heshen who corrupted an amazing number of treasures.

Well, in my opinion, government should spend money on museums if the place has many valuable cultural relics. Museum is actually a good place to go. People can learn about history through each piece of cultural relics exhibited there. I have once been to the Shaanxi History Museum. It is one of biggest museums in China. It is really eye opening to tour around the place. Besides, I think cultural relics can be better preserved in museums than in other places because they are under the protection of professionals. The temperature and moisture are all strictly controlled so that they would not decay. All these protections, however, can hardly maintain without the funds from the government.

⑤Do you think museums should be free?

Well, I think it depends. Generally speaking, it will do people good to visit museums. You know, they can learn more about history, how the society developed ect. So if the museums are free, more people can afford to visit the museum. But I also believe that the number of visitors should be restricted to a proper number so that the cultural relics will not be negatively influenced. If there are too many visitors, museums could charge admission fees to control the number of visitors. Museums could also use the money to conduct more research on relics. So it will be a win-win situation.