The average number of hours of teaching by each teacher in different type of school in four countries in 2001. 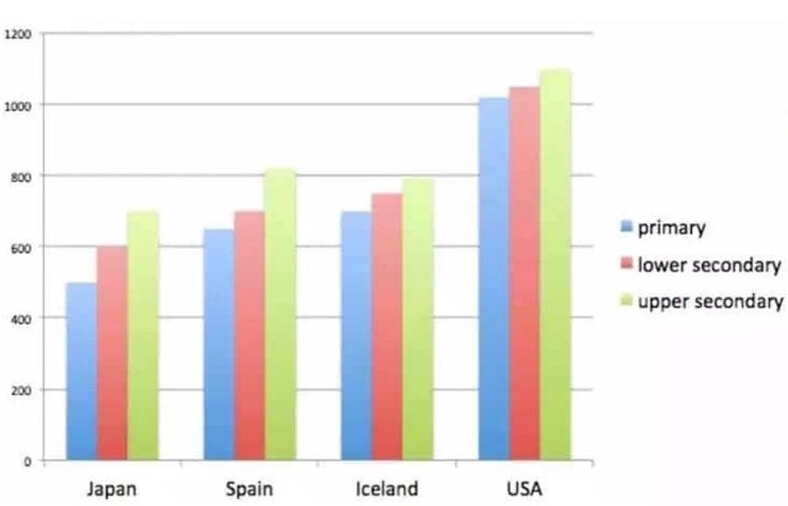 As is demonstrated in this bar chart, there are some similarities and differences in the teaching time spent by 3 kinds of teachers in 4 countries.

Teachers in upper secondary school were occupied the most time in Japan, Spain, Iceland and the USA. In particular, there was approximately 1100 hours’ working time for teachers in the USA. However, these figures for those in other 3 countries stood at 800 hours on average.

By contrast, teachers in primary school generally worked a lower number of hours with 1000 hours in the USA and around 600 hours in other areas. Lower secondary school is seen from the chart to maintain a middle position in this list.

In Iceland, teachers of all kinds experienced a nearly equal number of hours educating, in comparison to Spain and the USA where primary and lower secondary schools arranged similar working time for educators.

Overall, USA dominates others in total teaching time in these 4 countries substantially.

The range and quality of food has been improved with the development of technology and scientific advance. Some people think it is good and others think it is harmful. Discuss two sides and give your opinion.

Technology, the mighty force which is created by the comparatively smaller, walnut-shaped human brain, has changed the landscape, redefined the natural resources and even diversified the food we human beings rely on. The opponents and the proponents both hold their own justifications and I deem that there is no black-or-white conclusion of this issue.

It is more likely that food shortage will undermine the wellbeing of masses less frequently if technology and scientific breakthrough improve the quality and range of choices. In the past when we human beings relied heavily on the rather limited sources of food, a spell of abnormal weather can pose a threat to the yield of the crops and the health condition of livestock, let alone the unpredicted climate change. However, the miserable past is no longer the case today. People are less prone to the impact of scarcity of the food supply and the quality as more food sources can be utilized with the advancement of science.

On the other hand, the skeptics think technology a two-edged sword and the potential risks of technologically-modified food can never be underestimated. The security of some food generated by technology has not been identified, thereby entailing some unpredictable consequences. The genetically modified food, a milestone inhuman history, provides more options of food and enhances the quality on the one hand, also induces the doubts on its potential harm to human body and health.

Personally, I suppose a reconciliation should be achieved between this two statements. What really matters on this issue is how properly the technologically- changed food can function in the society and what the following steps we shall take if some dire consequences arise. After all, it is the tiny brain that has the final say instead of the technology it creates.