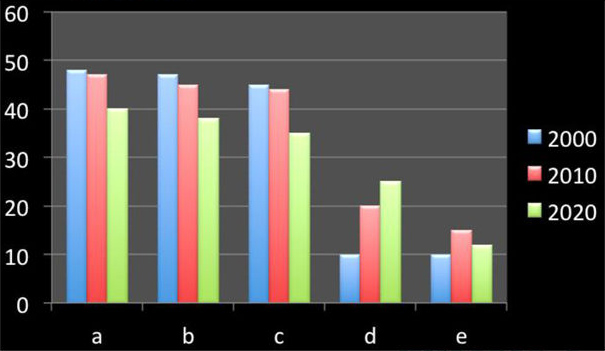 The bar chart compares the number of magazines in five different nations in the years 2000 and 2010. and the predicted sales for 2020.

It is noticeable that consumers in country a, b and c purchased more magazines than people in country d and e. and it is projected the same for the year 2020.

Iii 2000. around 48 magazines were sold per person in country a. which was the largest figure in the table. After experiencing a small decline in 2010. this figure is expected to decrease to around 40 in the year 2020. The similar sale patterns could be found in country b and c.

Magazines enjoyed the least popularity in country d and e. with only 10 and 11 sold in 2000 respectively. While a slight increase can be witnessed in the sales of magazines in 2010 in country c. at only 15. its sales is predicted to drop in the next 10-year period.

题目 As well as making money, businesses should also have social responsibilities. Do you agree or disagree?

The last years has witnessed the boom of enterprises. Apart from the target of making profits, the businesses are obliged to solve some social problems. This will have some positive effects on both our society and the enterprise itself, although the high cost on social issues may affect its normal operation.

It is widely acknowledged that the support from enterprises is of great value to narrow income gaps. Most companies have gained fiscal benefits from various entrepreneurial activities. However, there are still a large number of families that cannot afford educational expense and are at disadvantage in terms of educational opportunities and career development. If they can provide financial assistance for the students from disadvantaged backgrounds, these students will probably have a competitive advantage in the job market and land a decent job in the future.

In addition, when companies make contributions to solving social problems, there is a possibility that they can bring more profits to themselves in return. Many successful businesses have good reputations. If they decide to make joint efforts with other enterprises to help the public raise the awareness of environmental protection, the corporate image is likely to be improved. As a result, these businesses will be able to gain more profits in trade activities.

Admittedly, if enterprises spend too much money tackling social problems such as improving employees’ social welfare and medical service, the operation and development may be negatively influenced. More seriously, some companies will probably have to accept the fact of bankruptcy.

To conclude, businesses have the obligation to shoulder social responsibilities, which can not only contribute to social stability, but also enhance their own profits. although it may be difficult for them to balance social and entrepreneurial benefits sometimes.