The graph shows the spending on research into renewable energy of four countries from 1975 to 2000. 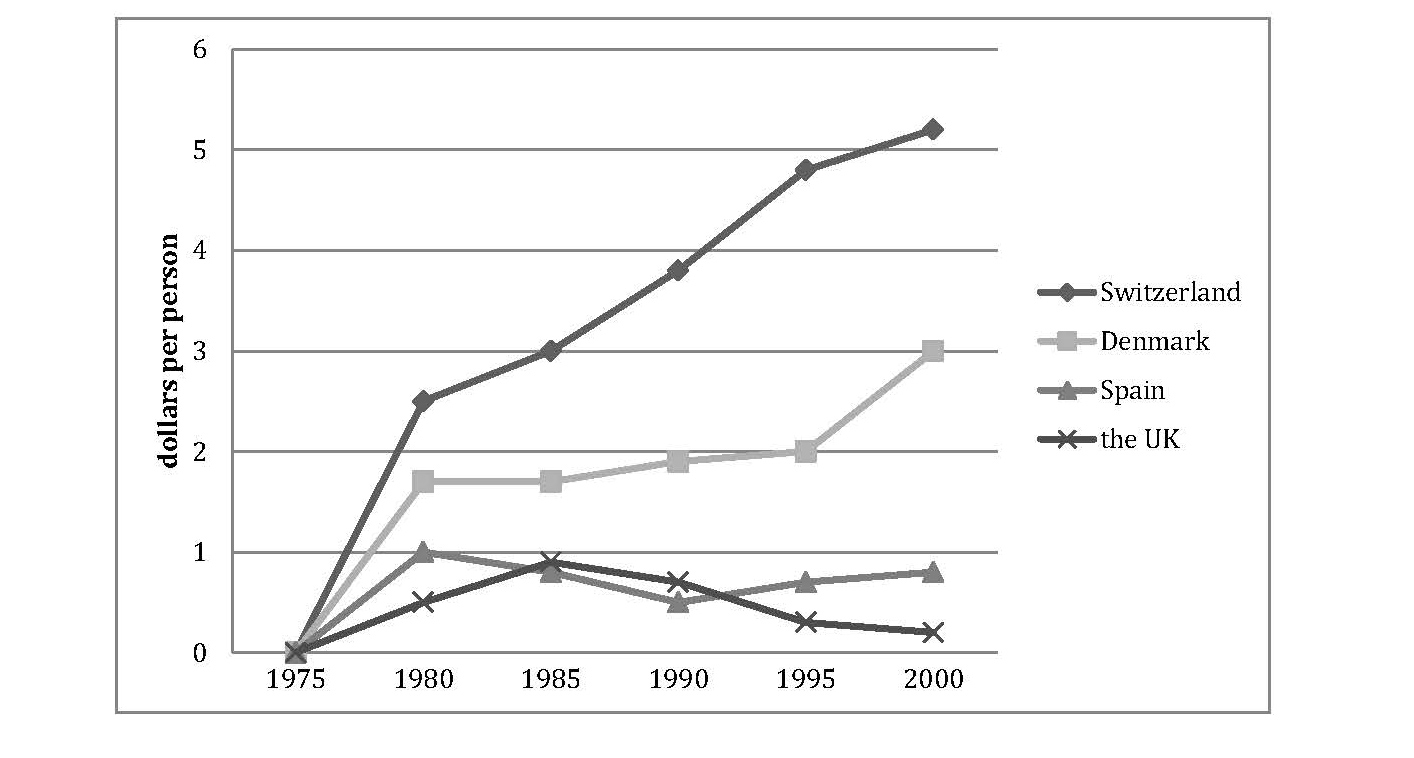 The line graph compares how much these four countries spent on the research of renewable energy during the period from 1975 to 2000.

In 1975, there were no countries budgeting for this research, while the spending from Switzerland, Denmark, Spain and the UK reached 2.6, 1.8, 1 and 0.5 dollars per person respectively in the year 1980.

In the following years, the figure for Switzerland nearly doubled, rising from 2.6 to over 5 dollars per person. The investment form Denmark almost leveled off from 1980 to 1995, after which it rose remarkably and arrived at 3 dollars per person in the year 2000.

When it comes to Spain, the spending dipped to 0.5 dollars in 1990, although it climbed again and ended up at 0.8 dollars per person in 2000. The investment form the UK peaked at 0.9 dollars per person in 1985, while it was the country which spent the least researching the renewable energy.

Overall, Switzerland was the country that allocated the most funds to the research of renewable energy, while the allocation from the UK was the lowest.

题目 Some people who have been in prison become good citizens later. Some people think that they are the best people to talk to school students the danger of committing a crime. Do you agree or disagree?

A child‘s education has never been about learning information and basic skills only. It has always included teaching the next generation how to become law-abiding citizens. While some people claim that those ex-prisoners are the best teachers to raise the awareness regarding laws, I believe that other measures are equally effective.

Obviously, ex-prisoners play a vital role in cutting youth crime. This is because those released

them. At the same time, they can share the tears and sorrows they suffered in the jails and the

harm they have brought to the victims and their family members. This is more impressivethan the

traditional lectures given by professors. By listening to a wide range of real cases in person, young

generation will realise the consequence of the irresponsible behaviour deeply and discipline themselves strictly in the future.

Nevertheless, I believe other alternatives should be taken into consideration as well. It is common for people to have a fear towards criminals, especially those who have committed violent crimes and therefore face-to-face conversation between the young and people with a criminal record might be inappropriate in some cases. By contrast, policemen normally have a good impression among youngsters and they can become the active voice in reducing juvenile delinquency. Apart from them, parents can certainly be the first to help children learn the differences between right and wrong since they are the people who know their children best in the world.

In my opinion, it is the responsibility of every member of a society to help the young generation to become good citizens.