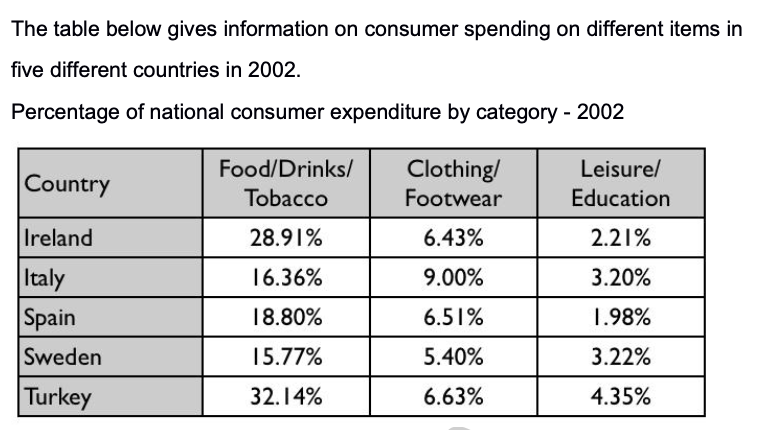 share/enjoy the second most popularity

答案：In a common English household, electricity used for heating room and water was the largest, occupying 52.5% of the total.

答案：The proportion of electricity used for lighting is equal to that for appliances, with 15%.

答案：The proportion of electricity used for heating is three times as much as that for appliances, with 52.5% and 15% separately.

The table shows percentages of consumer expenditure for three categories of products and services in five countries in 2002.

It is clear that the largest proportion of consumer spending in each country went on food, drinks and tobacco. On the other hand, the leisure,education category had the lowest percentages in the table.

Out of the five countries, consumer spending on food, drinks and tobacco was noticeably higher in Turkey, at 32.14%, and Ireland, at nearly 29%. The proportion of spending on leisure and education was also highest in Turkey, at 4.35%, while expenditure on clothing and footwear was significantly higher in Italy, at 9%, than in any of the other countries.

It can be seen that Sweden had the lowest percentages of national consumer expenditure for food/drinks/tobacco and for clothing/footwear, at nearly 16% and just over 5% respectively. Spain had slightly higher figures for these categories, but the lowest figure for leisure/education, at only 1.98%.