题目： The diagrams below show the stages and equipment used in the cement-making process, and how cement is used to produce concrete for building purposes. 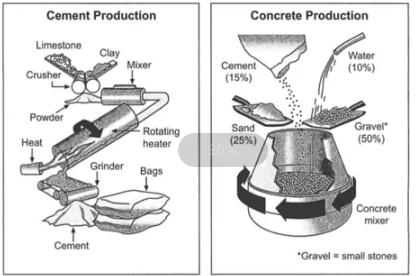 The first diagram illustrates the process of cement manufacture, and the second diagram shows the materials that go into the production of concrete.

It is clear that there are five stages in the production of cement, beginning with the input of raw materials and ending with bags of the finished product. To produce concrete, four different materials are mixed together.

At the first stage in the production of cement, limestone and clay are crushed to form a powder. This powder is then mixed before it passes into a rotating heater. After heating, the resulting mixture is ground, and cement is produced. Finally, the cement is packaged in large bags.

Cement is one of the four raw materials that are used in the production of concrete, along with gravel, sand and water. To be exact, concrete consists of 50% gravel, 25% sand, 15% cement and 10% water. All four materials are blended together in a rotating machine called a concrete mixer.

题目：The maps below show the centre of a small town called Islip as it is now, and plans for its development. 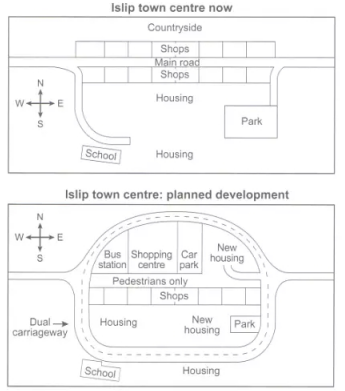 The diagrams illustrate some proposed changes to the central area of the town of Islip.

It is clear that the principal change to the town will be the construction of a ring road around the centre. Various other developments with regard to shops and housing will accompany the building of this road.

Looking at the map of Islip as it is now, we can see that a main road runs through its centre from east to west. The second map shows the planned pedestrianisation of this road. Traffic will be diverted on to a dual carriageway that will form a ring around the town centre.

题目The charts below show reasons for travel and the main issues for the travelling public in the US in 2009. 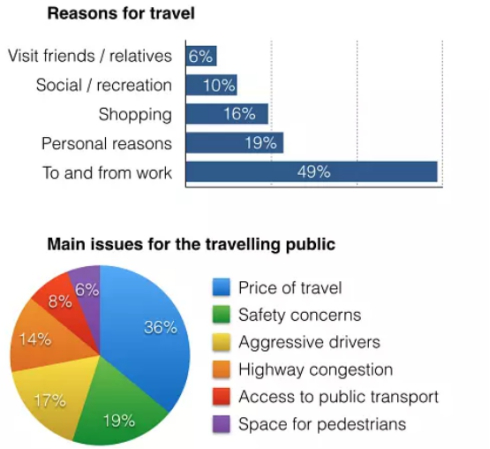 The bar chart and pie chart give information about why US residents travelled and what travel problems they experienced in the year 2009.

It is clear that the principal reason why Americans travelled in 2009 was to commute to and from work. In the same year, the primary concern of Americans, with regard to the trips they made, was the cost of travelling.

Looking more closely at the bar chart, we can see that 49% of the trips made by Americans in 2009 were for the purpose of commuting. By contrast, only 6% of trips were visits to friends or relatives, and one in ten trips were for social or recreation reasons. Shopping was cited as the reason for 16% of all travel, while unspecific ‘personal reasons’ accounted for the remaining 19%.

According to the pie chart, price was the key consideration for 36% of American travellers. Almost one in five people cited safety as their foremost travel concern, while aggressive driving and highway congestion were the main issues for 17% and 14% of the travelling public. Finally, a total of 14% of those surveyed thought that access to public transport or space for pedestrians were the most important travel issues.

题目：The table below gives information about the problems faced by children in two primary schools in 2005 and 2015. 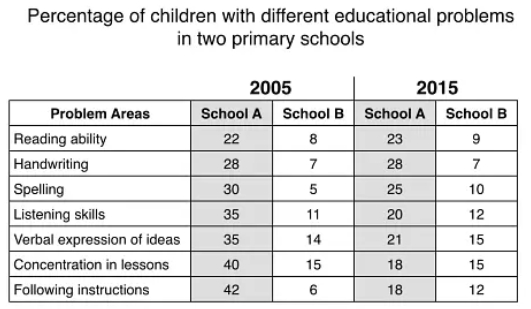 The table compares two primary schools in terms of the proportions of their pupils who experienced seven different educational problems in the years 2005 and 2015.

It is noticeable that school A had higher proportions of children with all seven educational difficulties in both years. However, while school A managed to reduce the incidence of most of the problems between 2005 and 2015, school B saw an overall rise in the percentage of children who were struggling.

In 2005, 42% of school A’s pupils found it difficult to follow instructions, whereas only 6% of pupils in school B experienced this problem. Similarly, between 30 and 40 per cent of children attending school A had problems in the areas of spelling, listening, verbal expression and concentration in lessons, while the equivalent figures for school B stood at between 5 and 15 per cent.

In 2015, the difference between the two schools was less pronounced. Notably, the proportion of children who struggled to follow instructions fell by 24% in school A, and this school also saw falls of 22%, 15%, 14% and 5% in the figures for children who had problems with concentration, listening, verbal expression and spelling. In school B, however, the proportion of children who struggled with spelling and following instructions doubled, to 10% and 12% respectively, and there was almost no change in the incidence of listening, verbal or concentration problems.

题目：The chart below shows the results of a survey of people who visited four types of tourist attraction in Britain in the year 1999. 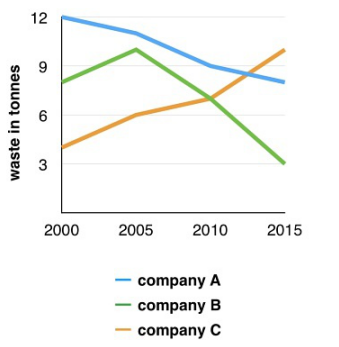 The pie chart compares figures for visitors to four categories of tourist attraction and to five different theme parks in Britain in 1999.

It is clear that theme parks and museums / galleries were the two most popular types of tourist attraction in that year. Blackpool Pleasure Beach received by far the highest proportion of visitors in the theme park sector.

Looking at the information in more detail, we can see that 38% of the surveyed visitors went to a theme park, and 37% of them went to a museum or gallery. By contrast, historic houses and monuments were visited by only 16% of the sample, while wildlife parks and zoos were the least popular of the four types of tourist attraction, with only 9% of visitors.

In the theme park sector, almost half of the people surveyed (47%) had been to Blackpool Pleasure Beach. Alton Towers was the second most popular amusement park, with 17% of the sample, followed by Pleasureland in Southport, with 16%. Finally, Chessington World of Adventures and Legoland Windsor had each welcomed 10% of the surveyed visitors.