Neuroscientist: Memory evolved to help animals react appropriately to situations they encounter by drawing on the past experience of similar situations. But this does not require that animals perfectly recall every detail of all their experiences. Instead, to function well, memory should generalize from past experiences that are similar to the current one.

The neuroscientist’s statements, if true, most strongly support which of the following conclusions?

A . At least some animals perfectly recall every detail of at least some past experiences.

B . Perfectly recalling every detail of all their past experiences could help at least some animals react more appropriately than they otherwise would to new situations they encounter.

C . Generalizing from past experiences requires clear memories of most if not all the details of those experiences.

D . Recalling every detail of all past experiences would be incompatible with any ability to generalize from those experiences.

E . Animals can often react more appropriately than they otherwise would to situations they encounter if they draw on generalizations from past experiences of similar situations.

Situation A neuroscientist claims that memory evolved to help animals learn how to react appropriately by generalizing from past experiences but that this does not require animals to remember all details of those experiences.

Reasoning What conclusion would the neuroscientist’s theory about memory most strongly support? The neuroscientist asserts that the evolutionary function of memory is to help animals learn to react appropriately by drawing on generalizations from similar experiences they have had. If memory is to serve this function, drawing on generalizations must actually help animals learn to react more appropriately than they otherwise would, even when they do not remember all the details of past experiences.

A Even if no animal ever recalls all the details of any past experience, animals could still learn through generalizations, as the neuroscientist claims.

B This statement could be false even if all of what the neuroscientist says is true. Even if it were never helpful for any animal to recall every detail of all its past experiences, animals could still benefit by learning through generalizations.

D The neuroscientist only claims that remembering perfect details is not required for memory to serve its function, not that such perfect recall is incompatible with memory serving its function.

E Correct. If the evolutionary function of memory is to help animals react more appropriately by drawing on generalizations from past experiences, it follows that animal memories can often successfully serve this function in this manner.

The correct answer is E.

Recent interdisciplinary studies advance the argument that emotions, including those deemed personal or private is a social phenomenon, though one inseparable from bodily response.

A . private is a social phenomenon, though one inseparable

B . private, are social phenomena that are inseparable

C . private are a social phenomenon but are not those separable

E . also as private emotions, are social phenomena not inseparable

The main problem is one of agreement: in the subordinate clause starting with that, the subject is the plural emotions, which demands the verb are, not is. Also, the phrase starting with including is a parenthetical expression that needs to be set off from the rest of the clause, with some punctuation to indicate a pause at its end (after private).

A The verb form is is incorrect, and should instead be are; the parenthetical expression is not separated at its end from the rest of the clause.

B Correct Are is the correct agreeing verb form, and the comma after private correctly sets off the parenthetical expression.

C Are is correct, but nothing after private sets off the parenthetical expression from the subsequent material. In addition, not those separable is awkwardly phrased; it would be better as not separable or inseparable as in the correct answer choice B.

D The dash would be correct to set off the parenthetical expression only if including had been immediately preceded by a dash; otherwise a comma is needed. The phrase not separable is awkward; it would be better as are not separable or are inseparable.

E The phrase also as private emotions is wordy and unidiomatic. The phrase social phenomena not inseparable not only does not express the intended meaning, but is also awkward without a verb and a relative pronoun such as that: a better phrasing is social phenomena that are not separable.

The correct answer is B.

Based on the given information, use the drop-down menus to most accurately complete the following statements. 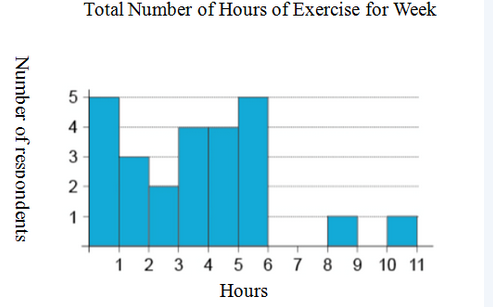 25A. The least possible value for the mean of the numbers of hours of exercise reported for the weeks is

25B. The number of respondents who exercised on average less than one-half hour per day during the wee is between